If you haven’t been living on another planet, you’ve probably heard about the horrific attacks in Paris, where islamist extremists have brutally killed at least 128 innocent civilians, and seriously injured many more. It certainly serves as a reminder that this is a dangerous world we live in and populated here and there by truly evil people, and that we need to remain ever vigilant against the threat they pose. Of course, this brings up the classic debate and tension between several very serious considerations – security, privacy and political freedom. I’m no expert in this area, but as an observer I want to point out a serious problem in the way the issue is discussed by almost everyone I know, including the news media.

On the one hand we have the very real concern that our reaction to security threats of all kinds (terrorism, organised crime, foreign nations) has resulted in serious harms to our society. In the modern age we’ve almost completely destroyed privacy, we’ve tipped the power balance in favour of business and government over regular citizens, and we’ve established a way of doing things that gives the impression that we’re all being watched and viewed as potential criminals or terrorists. Whistle-blowing and public-interest leaks might soon be impossible to achieve anonymously. Sometimes people’s concerns about authoritarianism can be unjustified, but it’s idiotic to ridicule them outright, because historically slippery slope of security has seen governments killing a lot more people (millions) than terrorists have done (though liberal democracies, while hardly untarnished, fare considerably better in this regard). It’s my suspicion that people inside the security establishment don’t realise that what seems perfectly reasonable to them seems shady-as-heck to citizens observing from the outside. Mistrust isn’t irrational when you consider the historical context and limited information available for citizens to make an assessment.

On the other hand, considering the massive and generally heroic effort authorities put into preventing attacks on civilians, and considering we most often don’t see or ever even hear about their many successes, it’s likely regular citizens systematically underestimate the enormous threat of terrorism and other similar phenomena, like the insane brutality where organised crime gets out of control (see Mexico for an example of how bad this can get). Essentially it’s like an iceberg that most of us sheltered civilians can’t understand or appreciate, hidden beneath the water. The horrors we do see are seriously destabilising as they are, and if we don’t take an extremely strong posture to external threats, they would likely be far more common and far greater in magnitude.

So on the surface of it, we have to choose to “balance” these two mutually exclusive concerns. That’s certainly the kind of language usually used to discuss the topic. This pits people against eachother depending on what they think is the worst problem. A set of individuals who are very concerned about security publicly argue for a serious of measures that, if we’re honest about it, pose at least a perceivable threat to freedom; while another set of individuals argue for a reduction of those sorts of measures, basically prioritising freedom and denying the threats to our security that are created by a weak response. My non-expert impression of this is that neither group has really got their head around the full set of concerns and issues, and instead just see the other’s concerns as a threat to their own. This is the tension-based model of thinking of security and freedom, which I’ve tried to illustrate here:

This tension is seriously destructive. It undermines citizen trust in the government and security, and undermines security trust in the democratic processes ability to respond to threats. Trust in democracy in several Western countries is at an historical low (“40% no longer believe democracy is the best form of government” – this is a serious crisis). For the faith in liberal democracy, a couple of major incidents around this point of tension could be the straw that broke the camel’s back. If the mission is to protect the integrity of our nations, the breakdown in internal trust should be one of the biggest issues on the radar.

Rather than treating this as a simplistic either-or issue, we may be more effective putting serious effort into identifying ways the two sets of concerns could be made more compatible. This means taking both sets of concerns seriously. It means eliminating the aspects of a security response which pose an unnecessarily high threat to freedom, and instituting political and civic practices that protect freedoms in ways that create less security vulnerabilities. In other words, spend a little extra effort modifying how we implement solutions to both concerns, so that they don’t get in each other’s way. I’ve tried to show this in the following model: 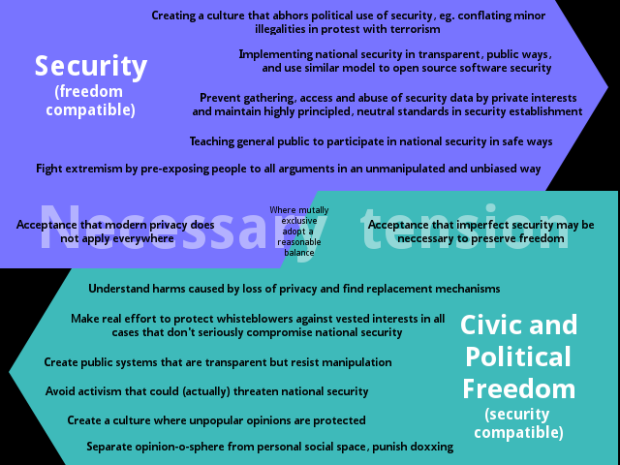 We especially need to think of the loss of privacy. I think of this as not unlike the irreversable failure of a biological organ. Privacy is probably on it’s way out, but our society as we know it may die without it. So, we need to work find a transplant – new mechanisms to provide the same benefits. For example, we might do more to ensure the loss isn’t one sided (citizens have no privacy while government and business do); finding ways to strengthen the freedom of small political groups who oppose very powerful groups or interests; and discouraging cyber-bullying, intimidation, doxxing and politically based employment discrimination (more dangerous than most discrimination, because racism won’t stop people being black, but losing their job might stop someone being involved in politics). These are just some basic examples.

I also wonder if we couldn’t adopt a strong security posture but in a more open, transparent and targeted way. Currently many security proposals are fiercely resisted because many people perceive them as wide-open to political abuse. If we close that possiblity in a public way, for example ensuring measures can only be leveled at very specific groups, people can safely support the measures. Security-orientated people may find a better return on the investment of their political capital if security measures are more transparent and therefore – from the point of view of activists, libertarians and other minorities who feel they might be politically targeted – more trustworthy. This could involve more citizen participation, and much more extensive civilian oversight. Probably, in return, we need to devote more funds to cover the increased overhead and bureaucracy that oversight and accountability creates. As large as that cost is likely to be, it’s worth it for the security, freedom and mutual trust we gain.

There are of course some situations when you can’t be open and accountable to that degree, and in those circumstances we just have to trust that the people in charge understand that abuse of power undermines security and national unity faster than any hostile party ever could. So long as we don’t allow definition creep to dillute its legitimacy, we can probably trust that people working in these ultra-serious domains have better things to do than pick on domestic political targets. If the boundary is blurred, then the legitimacy and authority of these institutions is undermined.

Again, I’d like to stress I’m no expert and this is just my two cents. But as yesterday’s attacks illustrate, even oblivious civilians can, in an instant, find themselves on the front-lines of security. It makes sense, in response to such events, that citizens participate in and spend time thinking about the solutions to this sort of horror, and how to protect ourselves without becoming the evil we seek to slay.

Note – I give permission for anyone to republish the two images in this blog post, provided they are not modified and no-one other than myself claims credit for their creation.